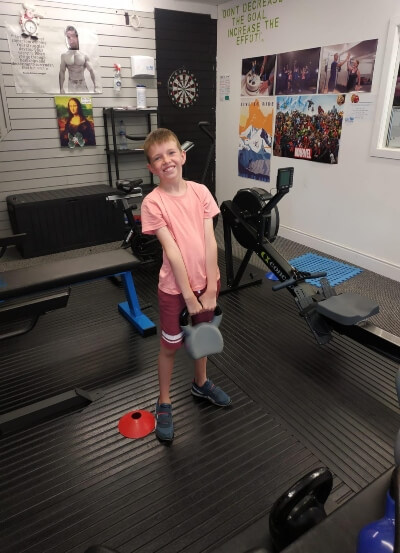 I signed my 8 year old son up for personal training as he has Dyspraxia and joint hypermobility syndrome. He tires very easily and doesn’t play much with other kids as he can’t keep up and gets very upset. His coordination is all over the place too, and he has very poor motor skills.
He also suffers with terrible pains in his legs due to the hypermobility of his joints.
Good muscle tone is vital to stop his joints dislocating and I was at a loss as to how I could help him as he would not join any sporting clubs.
Luckily I noticed that Eoin was training kids and I was knocking on the door straight away!

Olan loves going to EMF. The minute he walks in his face lights up. He loves all the high fives and knuckle touches!
He normally has the place to himself with Dean, and they have great fun. Dean plays games with Olan, but incorporating weights and using different muscles as they go. Nothing like a normal gym. Sometimes if I’m standing outside all I hear is laughter.

Olan has come on leaps, he’s out all day playing soccer, hurling, running. His stamina is unreal now, and his confidence has grown hugely. He has muscle tone now where before he had none. He has also been discharged from his physiotherapist.
I think he will become a lifer at EMF, he absolutely loves it, and knows himself how much it has helped him.

I’d definitely recommend PT sessions at EMF to any other parents whose kids have the same condition. It’s the best thing we have ever done for him!